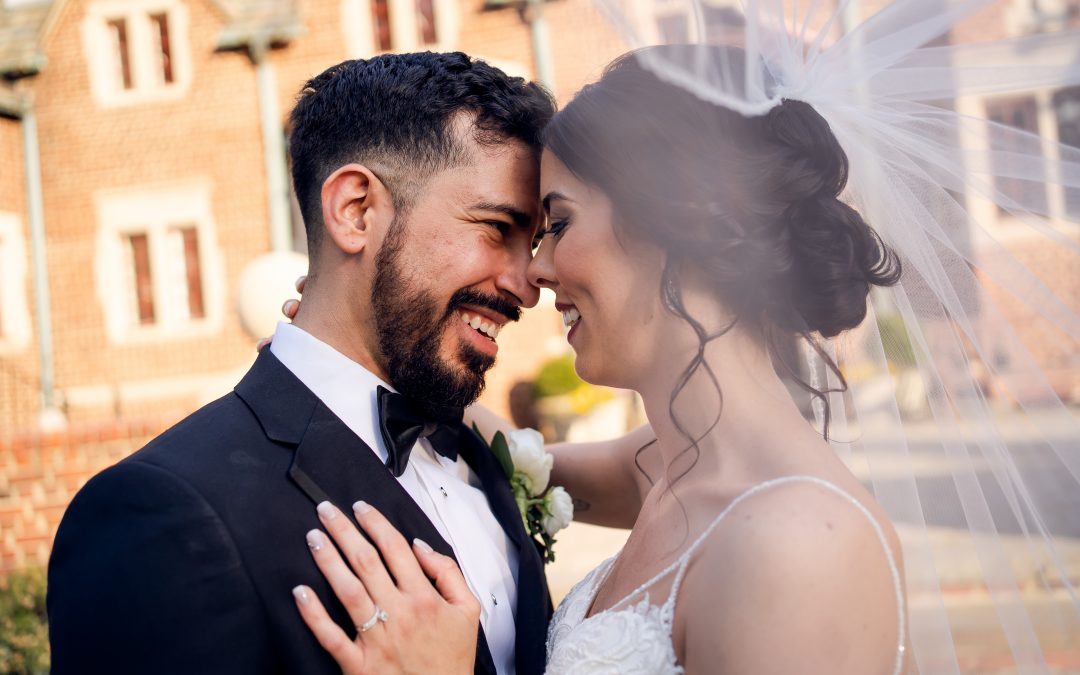 I don’t know about you, but I believe in fate. And fate was certainly at play when Trishlyn’s love story with Angel began.

When Trishlyn got off work at the mall, she had no clue her life was about to change. She got invited at random to attend a high school game with her friend to watch her friend’s sister play in the band. Angel also happened to be at the game to watch his sister cheer. Oh, and did we happen to mention that Angel just happened to also be friends with Trishlyn’s friend? It was a real-life meet cute.

“We both almost didn’t go. But we did, thankfully,” said Trishlyn. “He saw my friend and came over to say, ‘hi’ and she introduced us.”

Later that night, Angel asked for Trishlyn’s number and something told her to let her friend give it to him.

“Three days later was our first date—including our first kiss—and within two weeks, we were official. We both feel that it was total fate in the way we met and I can’t wait to tell this story as we grow old,” said Trishlyn. “It’s so rare that people just meet randomly and it needs to happen more often!”

For the next 10 years (well, next 10 and half if we’re being honest), these two never stopped reminding each other how much in love they were with each other.

She got the idea from her great-grandparents, who wrote to each other when they were separated from each other during World War II.

“When I got to read the letters [that] my great-grandfather wrote to my great-grandmother while he was at sea in WW2, I just always felt like it was the sweetest thing,” she said. “And there I was. Their seventh great-grandchild looking back on their love story. I hope our future kids/grands can do the same one day.”

Holding every part of their relationship dear to her heart, Trishlyn also made sure to hold onto one rose from every bouquet Angel ever gave her, so that when it came time for their wedding day she could display the dried flowers in a shadow box, along with parts of their love letters.

Now, I know what you’re thinking. These two need a movie made about them. Don’t worry, I’ve written to all the major production houses in my spare time.

It wasn’t long before Angel finally got the hint (only took nine years of hinting). And she definitely didn’t leave Angel wondering what he needed to do.

“Throughout the years I would hint how much I love sunsets, and that if and when he proposed I wouldn’t want a lot of people around,” Trishlyn said.

So naturally, Angel popped the question on top of a mountain in winter in Montreal in a public, scenic place.

“His plan was to go up to Mount Royal, which overlooks the entire city of Montreal. Mind you, it was mid-December, [so] it was probably -10 degrees up on that mount. I had a deep feeling that he was going to propose, because I’m nosey and figure things out,” she said. “I could tell he was getting nervous with the amount of people around, so I asked if he wanted to keep walking. We ended up on this small private lookout and he was talking about traveling more with me, just rambling. I could tell he was really nervous at that point, because he was repeating himself. A light snow actually started to fall. I couldn’t feel my feet. Before I knew it, he was down on one knee asking me FINALLY to marry him.”

It’ll come as no surprise that Trishlyn said yes! And they were quickly back in the car to get warm and start planning their dream wedding.

The best part of planning her wedding was bringing the vision to life with deeply personal touches, including that beautiful rose shadow box. Her grandfather also made the lanterns they displayed.

“There was a lot of personal touches and I wanted it to be that: romantically us,” she said. “I think one of my favorite personal touches was an idea I actually saw through Pinterest. Our table numbers were on mini notebooks for guest to write well wishes, messages, etc. in them for us to read on that number anniversary. I feel like that went really well with our personal history of letter writing.”

Finding a dress was easy for this prepared bride because she already had a vision for what she wanted in this dress. She made our job easy here because Trishlyn arrived at Laura & Leigh with a checklist of things she wanted her dress to have: fitted with a low back, a detailed back and buttons (of course). She wanted some lace with enough detail for a wow, but still simple.”

“Finding my dress was a piece of cake because I had a badass bridal gown consultant! and I’m not just saying that,” she said. “They say you get this feeling when you find the dress. You do. The first dress I tried on I had butterflies. I tried on more and went back to that one (that Laura chose!) and had the same feeling again. All the ones in between didn’t quite match that feeling.”

I know she credits LLB for helping her in her gown search, but really she did all the work! That dress went on and it was like fate brought her to her dream dress, because it was only in town for one weekend, and it happened to be the one she chose to come in!

Sure, there were stressful times planning her wedding. She did plan it during a global pandemic, after all. But this couple was smart with their planning and made sure to leave the last week up to small details and prioritizing relaxation, something all couples should really consider, if we’re being honest. Because she was so smart about wedding planning, she was ready for the day of and actually finds herself now missing the experience. Plus, she relied on faith to help her in planning through Covid and thankfully fate was on her side again when restrictions lifted close to her May wedding date.

“Everyone who replied to being there were able to be there. We are so, so thankful and blessed that things worked out the way they did,” Trishlyn said.

All of it was worth it, because in the end she got to marry her best friend and see all their hard work in planning come together beautifully.

“I can’t stop thinking or talking about my wedding day,” she said. “I was relaxed and so ready to marry my best friend. It was literally the best, perfect day. They don’t lie when they say it goes by fast though. I was most looking forward to, obviously, finally marrying Angel and really being with family and friends after the year we all experienced.”

The day was emotional and beautiful for this couple who put personal details and family first in planning their wedding. Her uncle performed their ceremony and her aunt performed a reading, making it that much more intimate and special, opting for their own vows.

“I don’t see my dad cry often, so it was really sweet to see his reaction in my dress. He cried…for days,” she said. “Just seeing both my parents’ and grandparents’ emotions was really special. These are the people who made me who I am today, and I can’t imagine what that was probably like for them to finally see this happening.”

“Literally all I saw was my husband. I feel like the music and everything disappeared,” she said.

The emotional, heartfelt ceremony quickly turned into an electric and fun-filled night for Trishlyn and Angel. The couple surprised everyone when their first dance to “The One,” by Matt Johnson and John Adams scratched and flipped into “Apache” by Sugarhill Gang, setting the tone for a night to remember.

“What surprised me the most and I think maybe everyone, was the fact that I had a red drink (my signature drink) in hand the entire night (no it never even crossed my mind about it being red) and it did not spill once,” Trishlyn said. “It went to the window, to the wall and got low! Not a drip. I think I had the cleanest wedding dress at the end of that night!”

This couple was lucky to be surrounded by so much love and have that love shine throughout the whole night – and even luckier that drink never spilled. Stories like this give us a small reminder that love is special and fate may just be real.

Trishlyn’s advice for future brides:
“My advice for future brides would be… Don’t sweat the small stuff. You will second guess…a lot but go with your gut instinct. Make a vow to yourself that you will not let little things bother you the day of and that you will enjoy it to the fullest. And I assure you, you will. [It’s] the day you waited so long for that no matter what small detail gets out of place, you’re marrying the love of your life and you deserve to feel your best and enjoy that day with them so so much! [It’s] one day that goes by so fast but if you allow yourself to have fun, it’ll be the best day and memory of your life.”