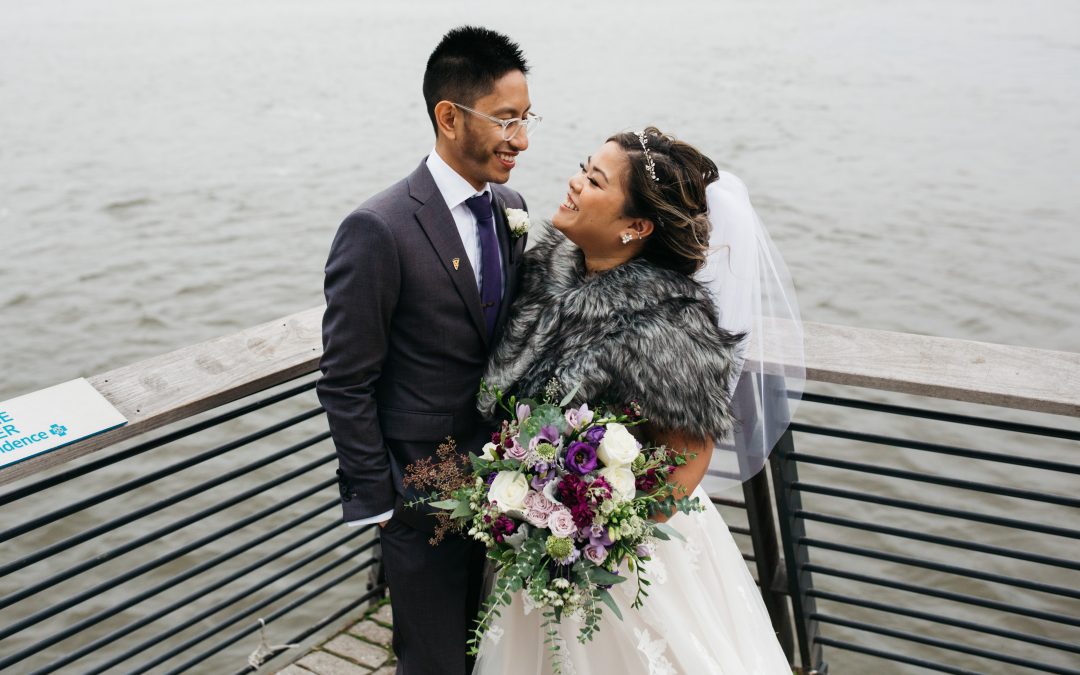 Christina and Kevin may have met in college at Temple University, but TUPAC brought them together ultimately. No, not that Tupac.

“We were both part of the Filipino cultural club called Temple University Philippine American Council, or TUPAC for short,” said Christina.

The club that brought Christina and her now-husband (spoiler alert) together was actually founded in the 90s, so the abbreviation was pretty perfect!

“The club was actually founded by my sister and a bunch of her friends, which I think is cool because if they didn’t start the group, maybe Kevin and I would have never met!”

It wasn’t long before they realized they belonged together, and one very hot day on vacation in Hawaii, they decided to make it forever. Christina remembers the heat of the day almost as much as the actual moment.

“It was so hot, because the trail did not have any shade so I was a little miserable heading to the top,” Christina said. They stopped at an overlook with a view for some photos. It was then Kevin decided to make it official.

“He said, ‘I have something for you.’ And I said, ‘Is it more water? Because I’m thirsty!’” Christina remembers. But ultimately, what Kevin had for Christina was even better (and more sparkly) than water: it was an engagement ring!

From vacations to parties to simple things like meals, Christina is a planner. It’s no surprise she was looking forward to planning her big wedding with Kevin. She was looking forward to her family all coming together. She was selective with her vendors, choosing ones that helped to make the process stress free and help her plan ahead for anything.

When it came to dress shopping, it was no surprise that she was prepared with pictures from her Instagram of wedding dresses that would best fit her style.

“It can be a little stressful only because there are so many options to choose from, which isn’t a terrible problem to have!” Christina said. “After narrowing it down, I knew that I wanted to have a lace dress with a very detailed back and one that wasn’t too puffy, less dramatic than a ballgown.”

As the stylist who had the joy of working with Christina, I can tell you that she really knew exactly what she wanted, which is actually a little rare for brides. Usually people pick out a photo online and after trying things on, they choose the opposite. But Christina really knew herself and really did her homework!

“Having Laura there to help was great. When I told her what I was looking for, showed her the pictures that I saved of other dresses, and told her where the wedding would be held, she understood the look and feel that I wanted and we found the perfect dress!” Christina said. “The dress that I ended up choosing was actually one that I had saved on my Instagram! I didn’t even realize it until Laura pointed it out” (It’s true, she did pick the one from her Instagram!)

For someone who enjoys planning, 2020 really threw a curve ball at Christina and Kevin. She was lucky to have been selective with her vendors and had a team that worked together to make her vision a reality, no matter what the circumstances, which wasn’t the case for every bride.

“Planning a wedding during a pandemic obviously was not ideal to say the least. The most stressful part was not knowing what was going to happen,” Christina said. “The city guidelines kept changing, so we weren’t even sure if we would be able to have anything at all. At one point, I was ready to just cancel everything and lose all the deposits because I was so stressed about not knowing what was going to happen.”

Like other couples affected by the pandemic, Christina and Kevin had to rethink their wedding vision. What started as a large wedding with roughly 300 people on the list had to shrink down to 50 people, which was one thing that Christina was really looking forward to. She couldn’t wait to celebrate with her friends and family and see everyone finally coming together for their big day.

“We kept thinking about all our family and friends from across the country and around the world that wouldn’t be able to come and be there with us, and even those who lived close by,” said Christina.

Like everyone else, we all thought things would be better by October, but that ended up not being the case and they didn’t want to push their date any further.

“We didn’t know how things would unfold with the pandemic. So, we decided that the important thing for us was to get married on the date we had set, whether that be a large or small wedding, so that we can continue living our lives and not have to worry about the wedding hanging over our heads for another year (or more, who knows),” Christina said. “Even though it did not go as originally planned, it was still a perfect day!”

Christina and Kevin really did have their perfect day. As many couples learned this year, the real key to the perfect wedding is being together. Christina just remembers all the excitement she felt and how much she was looking forward to seeing Kevin. After that, the long day went by in the blink of an eye.

“I was most excited – and nervous – about seeing Kevin for the first time during our first look, I really wanted him to cry! He almost did!” Christina remembers.

Of course, because it was 2020, they wouldn’t get by their big day without one more curve ball. Rain snuck into their forecast. They kept an eye on the weather all week, promising chilly weather, but no rain. In true 2020 style, the day came and so did clouds.

“We were lucky enough to have no rain when we took pictures at Race Street Pier, but it would not have been enjoyable to sit outside, eat dinner with it being wet AND cold outside,” said Christina. “I’m glad our event coordinator at Cescaphe asked us if we wanted to move everything indoors, it was definitely a pleasant surprise!”

She was also excited to finally have fun with family and friends. The pandemic kept her and her family members apart for most of the year, so this was finally their chance to be together and dance!