This Timeless Wedding in Philadelphia is the Perfect Inspiration 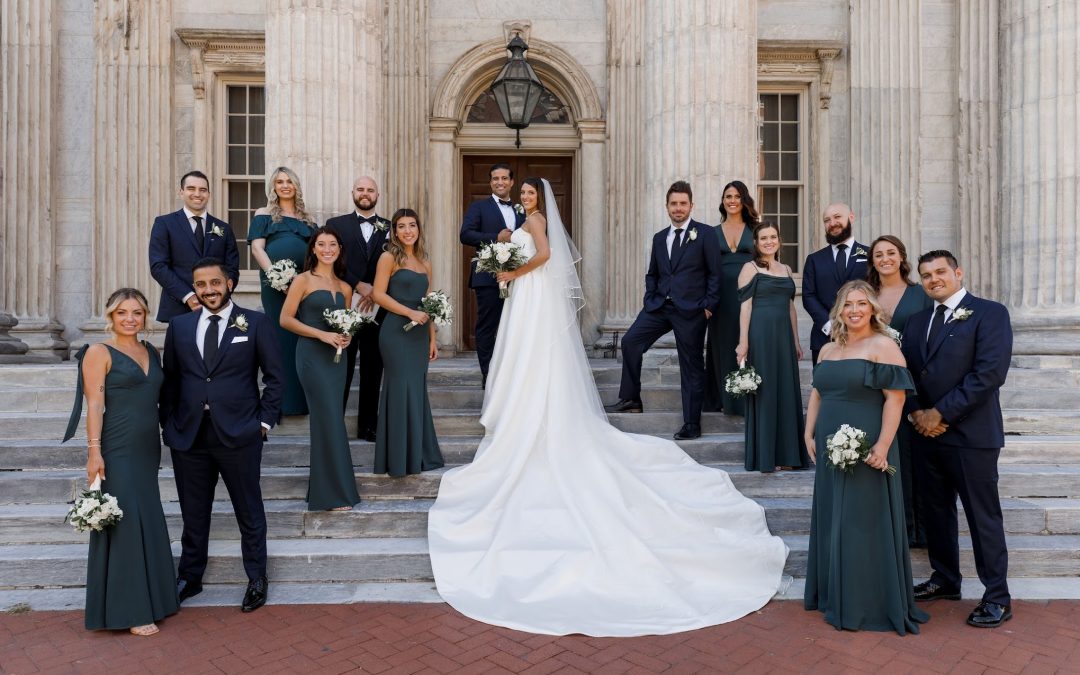 In an era when one of the most common ways to meet your person is to swipe left or right and hope for the best, Aley’s love story is, as she calls it, “a little old fashioned.” Although to me, their love story feels like it was pulled out of the opening scene of a rom-com.

Aley found herself in a pretty (annoyingly) common situation at a bar: the creep who won’t stop trying to talk to you, even though you’ve already politely said no. She quickly found herself searching for a lifeline, and found one. She shielded herself by walking out, grabbing the hand of a nearby guy and pretending he was her boyfriend. Thankfully this kind stranger went along with it and said he was on his way to meet with her at that moment. Once the creep safely creeped away, the two strangers parted ways.

It wasn’t until later when they bumped into each other at a different bar that these two people stopped being strangers and their love story began.

Shadi and Aley were together for some time before their unforgettable trip to Cappadocia, Turkey, or better known as the place where their little love story would begin their chapter of happily ever after. Shadi planned an elaborate proposal with a big hot air balloon ride – if you knew Aley, it was perfect. But of course, plans always need backup plans, because the winds were not cooperating that day. Shadi pivoted and schemed with the hotel staff to have the proposal be special during a tour of the beautiful city.

The tour began with three couples: a couple dating, a married couple and (of course) Aley and Shadi. The guide got the couples confused and ended up telling Aley that the proposal was for a different couple on the tour. She was so excited to see the other couple get engaged, she was unaware of Shadi planning to find the perfect spot right in front of her! Shadi found the perfect spot in Love Valley and surprised beautiful Aley with a beautiful ring.

“After the excitement of the engagement calmed down and we were making our way back to the bus I said to Shadi “Oh no, do you think you stole that other man’s thunder? He’s supposed to propose to his girlfriend too,” Aley said. “Shadi just laughed and assured me I was the only one getting engaged and no one’s moment was ruined.”

Aley has such a beautiful eye for detail and style that it wasn’t surprising at all that wedding planning was going to be totally her thing. She enjoyed every part, especially because she had the help of an amazing wedding planner, Jenna Tracy.

“I think my favorite part though was slowly seeing my vision come to life through our planning meetings and conversations with my vendor team.” Aley said. “I loved finding elements of Grace Kelly & Princess Diana’s wedding and seeing how we could put a modern twist on them.”

Aley has such an amazing appreciation for classic style and when it came to her wedding dress, being timeless was a key qualifier.

“My dress was a big part of my design and vision so I needed something that was going to not only match our venue, but also my aesthetic. I also knew that I wanted a slim fitting dress with a big overskirt and a long train for that real princess effect,” Aley said.

She went in with an open mind, willing to experiment on other silhouettes and styles, just in case when she tried it on, she surprised herself.

“Laura will joke and say that I was not open to beading (against my mother-in law’s wishes),” said Aley. “It’s so hard when you are dress shopping because every dress is so beautiful. I had been to another bridal salon before going to Laura and Leigh, so I would say that I was very lucky that I found Laura and Leigh early in the process, and was able to find my dream dress immediately.”

Even though Aley was lucky enough to have a great coordinator and vendor team (and even had an easy time with wedding shopping), she was still unfortunately a “Covid Bride” with her wedding unfortunately affected by the global pandemic.

“I am very much a ‘type A’ person and love to have concrete plans and deadlines so it was tough to not always be in control since everything was changing,” said Aley. “I was also the type of bride who had been planning this day since I was a little girl so there was the emotional piece of not being able to fully have what I envisioned.”

She knew what was important: keeping her venue in Philadelphia and also making sure her guest list didn’t have to be cut down. The wedding was full of meaningful people, and they didn’t want to risk anyone not being able to make it. The couple ended up having to postpone almost a whole year from their original date.

Postponing a whole year was definitely the right call to make sure that her guests could be there safely, but there was one small challenge: her original date was close to Christmas and her new date was in the fall.

“The only thing that stayed the same was my wedding dress, bridesmaid dresses and floral colors,” Aley said. “In the end, we replanned a wedding, swapped Santa coming at the end for a caricature artist and were able to have all of our friends and family in our dream venue in Philadelphia.”

Ultimately, regardless of what time of year the wedding was, there was one thing Aley was looking forward to the most: having her family and friends in one place, dancing the night away after all the craziness that happened with Covid.

“The best part was definitely my dress lol,” Aley said. “But no, in all seriousness the best part was just being surrounded by so much love for a whole weekend. I know it sounds cheesy but we are a family that loves love and loves to have a good time.”

For Aley and Shadi, it was the weekend that flew by in the blink of an eye but the one that they’ll never forget.

“Everyone always says that the day goes by so quickly, but I think I really underestimated that,” said Aley. “We had a whole wedding weekend planned that felt like it lasted 2 minutes, so I think the biggest surprise was how fast it actually did go.”

Aley’s Advice For Future Brides:
My advice is that this is the one time in your life where you are fully allowed to be selfish and think about you and your fiancé. Do what is right for the two of you and don’t feel like you need to make everyone happy because at the end of the day you can’t please everyone, and it will only add stress on you and your fiancé. I would also say don’t feel the need to rush. I had a very long engagement – almost 3 years thanks to COVID. Having extra time allowed me to really consider all my decisions to ensure that’s what I wanted and allowed me the time to get a team of vendors that I really loved. Just take it one step at a time, and when it comes to planning table arrangements make sure you have an extra bottle of wine available lol.